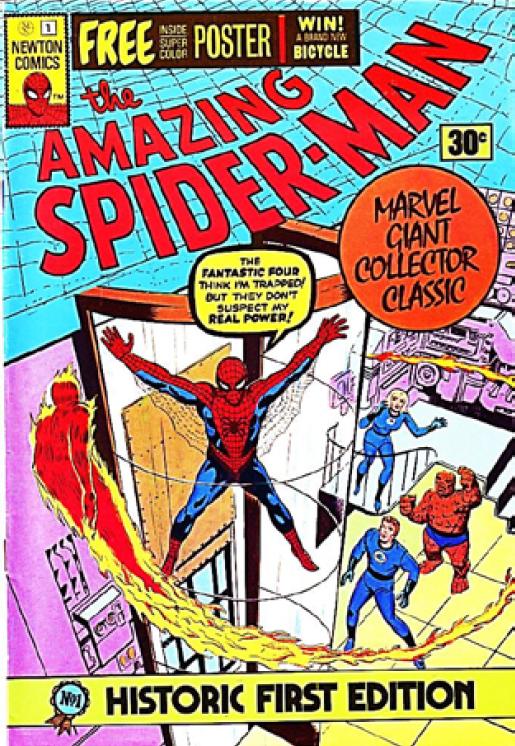 Publisher Maxwell Newton “thought that printing comic books would be an easy way to make money back in 1975”, says Daniel Best in his 2014 book, The Amazing Rise & Spectacular Fall of Newton Comics.

Maxwell Newton was publishing the Sunday Observer newspaper in Melbourne, and desperately looking for work to occupy his presses for the other six days of the week.

In 1975, I was in the first year of Commerce/Economics studies at the University of Melbourne.

I was working part-time in the publishing room of the Newton group, and I conducted a double-page interview with Newton, which was published in the Uni-versity newspaper, Farrago.

I was not Max’s average press-room labourer.

Newton had done a deal in May 1975 with Marvel Comics to print, publish and distribute their books across Australia.

Late in 1975, Newton offered me a summer holiday job. There was a warehouse, across the road from his Newton St printery, in the grounds of the old Richmond Brewery.

The warehouse had more than half-a-million comics, returned unsold from news-agencies across Australia.

The giant job was to sort them, label them with a discount sticker, and send them back into the retail world, in the hope they would sell better on the second time around.

It was a desperate dash for cash. Best records that the Newton group was starting to collapse by February 1976, with $2 million in debt hanging over its head.
Comics collector Robert Thomas, in a Collectormania magazine report, notes some of the prices that were achieved on eBay. 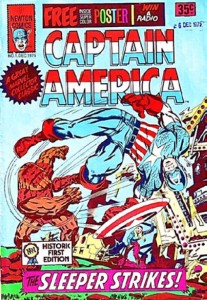 If only I, as an impoverished 19-year-old, had the foresight to have collected some of these titles, to reap the benefit of their collectors’ values in the 21st Century!

Best records: “In its short, turbulent existence, Newton Comics managed to publish over 180 separate comic magazine titles, a feat that not even its American licensor, Marvel Comics (US), could match in such a short period of time.

“True, many of Newton Comics’ publications were of variable, even dubious quality –but they weren’t always like this. Newton Comics can take credit for reintroducing some of Marvel Comics’ greatest characters, such as Spider-Man and The Fantastic Four, to Australian audiences after a decade-long absence from these shores.

“Newton Comics also unveiled some of Marvel’s newest and most innovative titles of the 1960s and 1970s – such as The X-Men, The Silver Surfer and Tomb of Dracula – which had not been previously available in Australia.

“They may not have been printed in colour like their American counterparts, but Newton Comics offered more pages, with far fewer advertisements, for just a few cents more than most imported American comics of the time.

Other comics, mostly 44 pages including colour covers, included The Avengers, Planet of the Apes (being shown on TV in 1975), Dr Strange, Conan and Captain America.

In charge of the comic project in 1975 was Marty Dougherty, who later found notoriety for his association with ‘young’ Warwick Fairfax unsuccessfully attempting to buy back the Fairfax press empire in 1986.

(Dougherty was said to have been promised up to $10 million as a success fee, according to Colleen Ryan’s Fairfax: The Rise And Fall.)

Compare the $10 million, to Marty’s 1975 job, ticking off on some of the titles including Deadly Hands of Kung Fu, Monsters Unleashed and Submariner.

By April 1976, Newton had been dismissed by the receivers.

University student John Corneille was Newton Comics’ editor.
He was responsible for letters columns and feedback to readers.

Comics fan Kevin Patrick writes: “Newton Comics had a disproportionately large influence on the formation of Australian comics’ fandom, and was instrumental in bringing together local writers and artists responsible for creating some of first “new wave” Australian comics of the 1980s.
“That’s a not inconsiderable legacy from a comic-book publisher which was in business for less than 12 months.”

In the 1960s, Marvel Comics were being brought into Australia for sale.

In 1974, As 1974 started, Martin Dougherty approached Newton on the idea of publishing comic books. Dougherty had worked at The Australian, later becoming the Weekend Magazine editor at the Melbourne Herald, moonlighting at the Sunday Observer on Saturdays.

The matter of having the rights to print Marvel Comics was secondary.

The amount settled on for the complete rights to publish/reprint Marvel Comics in Australia was $75,000.

The first payment of $30,000 was made. It was the only money that Marvel Comics US ever received. 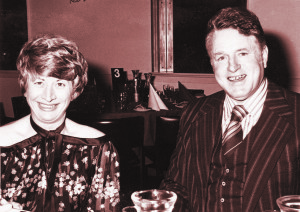 Says Best: “The first real test of the Marvel material came with the publication of The Amazing Spider-Man in the comics section of the Sunday Observer.

“The highly popular ‘Watchamacallit Club’ was put together and edited by Peter Viska and ran comic strips, games and more. The Spider-man strips were adaptations of the comic books themselves and the feedback was positive enough for Newton to go with full blown comic books.”

Best continues: “Newton would use the Sunday Observer to promote the comic books on a regular basis.

“The most effective of these cross promotions came with two Planet Of The Apes giveaway booklets.

“The first, inserted into the Sunday Observer on the June 1, 1975, gave details of the movies via standard articles of the times and included a full colour back cover promoting the comic book.

“The response to this insert was promising enough for a second issue, this time inserted into the Sunday Observer on June 15, 1975.

“Again the insert had articles about the series and movies but it also had a centerspread, in full colour, promoting Newton comics. “These two digest-sized publications are amongst the rarest of all Newton collectables.”

The Amazing Rise & Spectacular Fall of Newton Comics includes my ‘production notes’ for each comic title, and the price reductions applied to each book in the ‘Heritage Series’.

The book refers to almost 120 titles being processed by my team of casual workers, ready for release in March 1976.

The book notes: “Newton approached a casual employee, Ash Long, with instructions to reduce thr prices of the comics and then get them into the marketplace as rapidly as possible.

“The first move was to re-package the existing comic books at a reduced price and ship them back to the stores that had previously returned them.
“Thus the ‘Heritage Series’ was launched.

“The series saw the comics discounted by 20 per cent with a price sticker attached to the cover reflecting this.
“A comic that had previously cost $1.00 was now a mere 80 cents; very affordable.

“It also meant that the returned titles that hadn’t sold at 30 cents and 35 cents might have a better chance at prices of 24 cents and 28 cents respectively.
“An added bonus was the clause which any copies being sent back to the publisher unsold. This didn’t prevent stores from sending back dead stock.
“Corneille once again put the most positive spin on events as he could in his Bullpen pages.

“‘Changes are coming and we know you’re going to praise them as the best offer Fandom has ever had,” he wrote.
“‘Firstly, back issues: we’ve had such response to our back issue offer that we set to work working out out a better way to sell them to all collectors.
“‘Our plan? We will be distributing our rare back issues through news dealers as special editions.

“‘Now not only will you save on postage costs but they will be much cheaper than evber before!
“‘Yes, we will be selling them at less than cover price. This is possible only by doing our own distribution. Remember these will sell out almost immediately so be sure you get the issues you need fast … an offer like this cannot be repeated because once they are sold out there can’t be any more.”

“In February 1976, Ash Long approached several Melbourne University students who were happy to work for cash-in-hand payments and each Friday, from the hours of 7am to 3.30pm, the assembled crew worked to repackage the nearly half a million comic books with a target of at least 300 comics to be processed per hour.

“The initial aim was for at least 1500 of each issue of every title to be repackaged and sent back into the marketplace.

“Thor posters were also inserted into the last issues of Captain America and Planet Of The Apes and into a random slecetion of titles such as Daredevil, The Incredible Hulk, Sub-Mariner and Deadly Hands of Kung Fu, which explains why some people owneed comics with posters and others did not.

“Amazingly, 27,550 issues were processed over a three-day weekend at the end of February.

“The other plan was to take all the remaining unpublished stock and publish it as soon as possible while remaining cost effective.
“The result was a series of one-shot comics and giant sized specials.”

Best continues: “By mid-1976 Newton’s larger than life persona was impacting upon his publoishing brnach overall, not just the comic books.
“Suffering heavily once more under the incluence of drugs and alcohol, Newton’s erratic behaviour resulted in some memorable moments for the Newton Publising staff.

“‘Max was having trouble staying off the booze,” says former editor John Sorell.
“‘Once I found him lying flat out on the kitchen floor, drunk, reciting 16th Century poetry.
“‘He struck me as a wayward genius.’

“Ash Long also recalls a night where Newton entered the press rooms only to urinate over reels of newsprint newsprint which was being readied for printing.
“It was later revealed that Newton had been fighting off insolvency as far back as 1971 when he launched the Sunday Observer.
“In such an environment was clear that something would give.

“‘It was decided the comics had had their day,” remembers Corneille.
“‘Newton tried a Happy Days magazine to cash in on the Fonz craze and it was very successful.

“‘This prompted Marty to change tack from comics to teenage mazgzines.

“‘I suspect Newton may have had a few re-organisations or corporate cganges to dodge various creditors as there was always doubt as to whether the pay cheques would bounce at this stage.”

And, so, Scream and Sweet magazines made their way via Towart Distribution Co. to local newsagents, pumping out publicity about the Skyhooks and Sherbet pop groups of the time.

Corneille continues: “Most of us never got paid for many of the last weeks of work we did.
“‘Newton went bankrupt about a year later I seem to recall.

“‘In the final analysis I think they probably made money but only because they never paid Marvel anything but a total amount.
“‘If they had paid according to the agreement it would have not been a viable proposition.’

Dougherty is quoted to recall: “We’d been through several months of having our cheques bounce and having troubles with salaries.”

Max always looked after me with my pay cheque, giving me my cheque 30 minutes before the others.

It was straight in to my Holden Torana, and off to the bank of the day – such as ANZ Windsor or Commonwealth Richmond to cash the cheque.

Another Editor Brian Blackwell was quoted by Best: “(Newton) struck me as a desperate man, who could see the house of cards about to tumble down. but he kept on putting off the inevitable, launching into new plans for the paper and other publications, but always everything was strapped by lack of cash.
“‘The staff was now being paid in cheques, and when they were handed out we would all speed down to the nearest bank in Richmond and queue up to have them cashed.

“‘This went on for only a few weeks, though. We took pot luck from then on, but I don’t recall not being paid, or being left with any dud cheques.
“If I had been ,I wouldn’t have minded, because Max had always been fair and genrous with me, and the other journos … I admired his contempt for the establishment and the way he lived life as a maverick publisher.

“Looking back though, I think he may have been a man who sold out too many of his ideals along the way.

“Cash meant everything to him – when the mail order money arrived, Max would dip into them and rip out any cash money inside,” Blackwell said.